During the Easter break, I went to see a show being performed by the Renegade Theatre Company (who I previously wrote about here). It was a youth production of ‘Spring Awakening’ which is one of my favourite shows about discovery in your teenage years, set in late 1800s it is aimed at an older audience and includes rock and folk inspired musical making it an alternative musical theatre show. When I was watching the show I was completely blown away by the acting, harmonies and singing on the performance side, but also by the use of props, set and lighting to create impact and suggest features using an alternative stage. 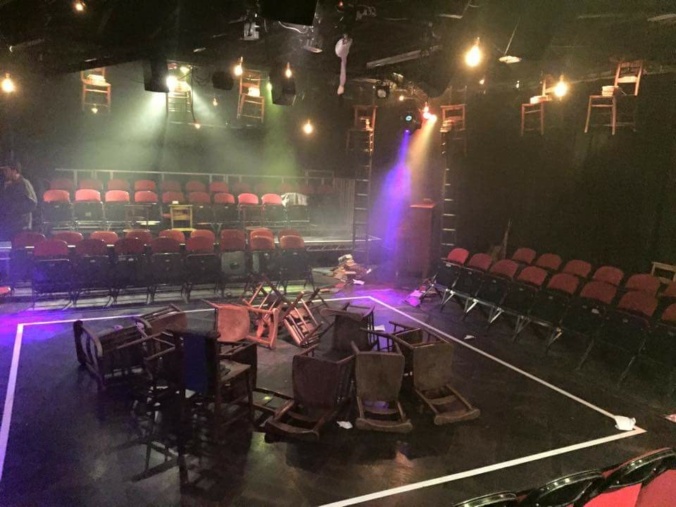 The image above shows the stage set up for one of the scenes within  the show, the stage itself was a square surrounded by seating, so the performance itself had to be seen and create an impact on 4 sides, a challenge for both the actors and the set designer. The actors also integrated themselves with the audience behind some of the front rows for certain scenes, this created a sense of inclusion for the audience as they became part of the show as they were also watched by the opposite rows of seating. The use of chairs was a big part of the show, mainly because it centres around the education system and how the teenagers don’t think they are being told everything by their parents and teachers etc. and want to know more. The school-like chairs also acted as different props and set elements so the audience had to use their imagination to see certain things on the stage as the chairs became symbolic. 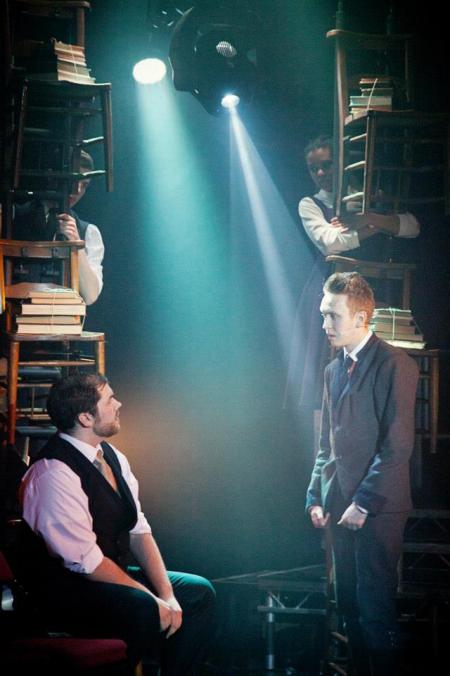 Around the entrances and exits of the stage were arches comprised of ladders, chairs and props such as books. These were used consistently by the actors throughout the show – as you can see above – to climb on and almost appear to ‘watch’ the show as it was very rare that all the actors left the stage for any scene. It also helped to create levels within the set, which could not be achieved on the main stage due to the limited space and the fact that it would reduce audience viewpoints, they were permanent features whereas the props on stage were moved and changed constantly in the show depending on what was needed in the scene. The actors themselves brought the props and set elements on and off stage, making the transitions quite smooth and the use of a simple set necessary, which is why the permanent elements around the edge were so important. 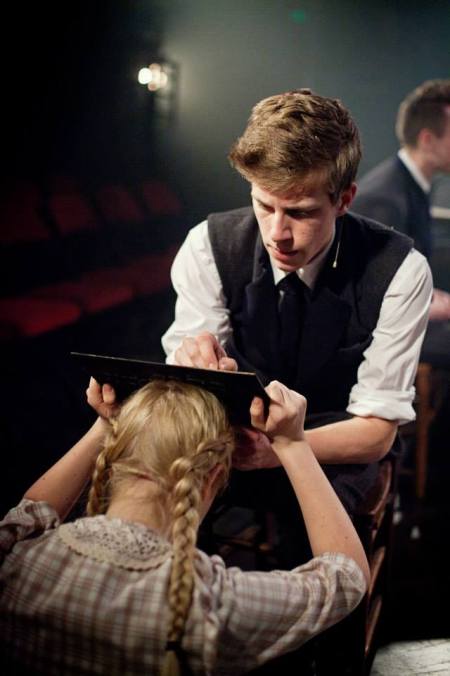 Due to the limited space and backstage potential of the small theatre – as well as the style of the show – most of the actors remained on stage for the entire show, so they were made use of in the scenes in an unconventional way. For example, in the image above it shows one of the school scenes where the male character’s storyline is being told, however the female actors were used as school benches to hold the chalkboards instead of the addition of tables to the set (which would be another thing to move off stage). This idea was used throughout the show, such as the scene where the main female character Wendla is singing and moving around the stage on chairs, the other actors would walk across and place the next chair for her to stand on, getting them involved as well as fluidly moving the set around. I liked this idea as it also gave the actors more stage time and there was more to look at from all the seating angles around the stage. 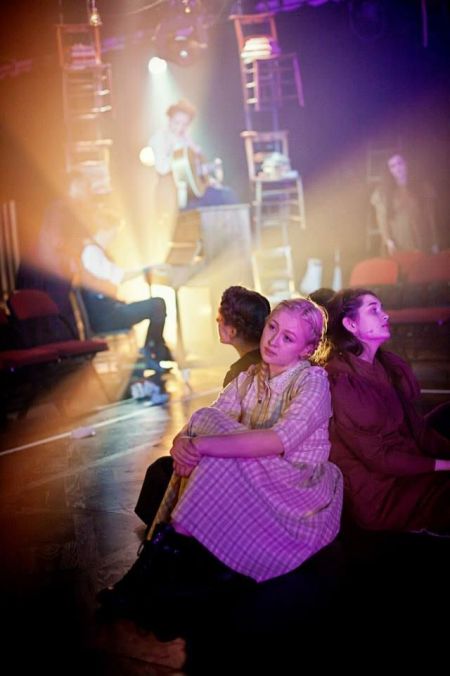 Another thing I liked about the show was the lighting design, it was very atmospheric and included flashlights, candles and mirror reflections as well as standard theatre lighting which made the show stand out from others I had seen. The designer for both the set and lighting for this show was Ben M Rogers and has previously designed for shows worldwide including the UK tour of RENT and The Wizard of Oz in Dubai. I found it interesting that he had designed both the set and lighting, but it makes sense as he would be able to think about how the set would look under the lights and how to create impact with shadows etc.

Overall, I really enjoyed watching the show and observing the use of set and lighting from my course perspective and from the view of an audience member. Renegade Theatre Company put on regular youth theatre performances in the new Duke Street Theatre in High Wycombe as well as other musical theatre and performance events.