As well as Spring Awakening, during the Easter break I was lucky enough to have the chance to go and see the West End performance of ‘Billy Elliot the Musical’ in London’s Victoria Palace Theatre. This has been a show that I have wanted to see since I first watched the film a few years ago and became caught up in the story, characters and dancing. The stage show was much more than I was expecting, I wasn’t sure about how the musical element would be added, but the songs (written by Elton John) fitted spectacularly and stayed true to the Newcastle accent and dialect. 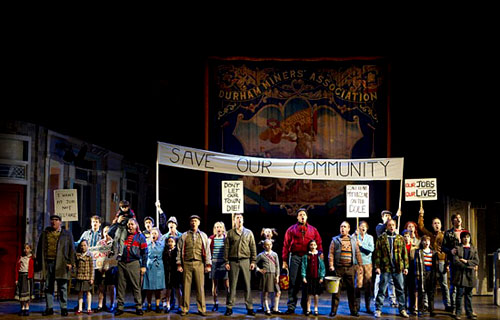 The main set used throughout the show was comprised of a three walled room set that became the Elliot’s house, the workers union and any other building it needed to be and although the actual walls didn’t change, you never questioned that the room was the same as the actors and added elements made it clear where they were. Parts of this set could also be pulled out to make it a different room such as a dressing table or toilet stalls, changing it again into a completely different setting without much effort. The painted walls used scenic effect painting to make them appear worn and well-used, as one of the main themes within Billy Elliot is the idea that the families in the village are ‘working class’ and emphasised the tough times faced by the miners who went on strike in the mid-1980s.

The set designer for Billy Elliot was Ian MacNeil, most well-known for his ‘An Inspector Calls’ set that he designed for The National Theatre although the play subsequently transferred onto the West End along with touring productions. You can almost see a similar style of design for the ‘Billy Elliot’ and ‘An Inspector Calls’ sets, with the use of the open buildings and walled rooms that allow the audience to almost look inside the building itself to see what is happening. 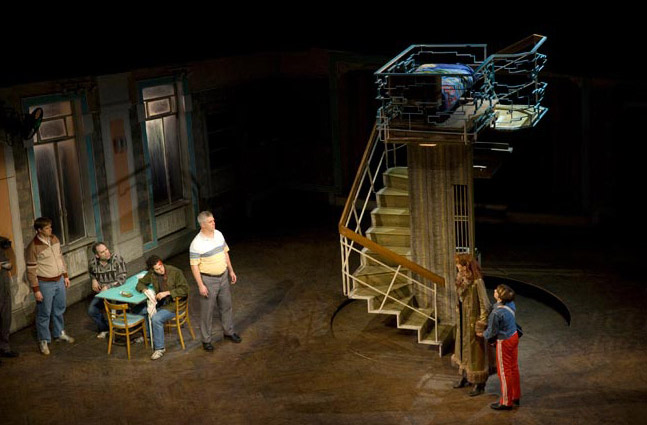 One of the other impressive set elements that featured throughout the show was the parts of the stage that rose up and turned, becoming platforms and ways for the actors to exit on and off stage. The large central staircase that leads up to Billy’s room is a good example – again – of how a minimalist set can still symbolise a much larger space, as even though the staircase was small set piece, it gave the impression of there being an upstairs to the house and a much larger living space. These motion stage elements were constructed by Hudson Scenic Studio from the designs by Ian MacNeil for the original show, they are a large company who build large scale props, set and motion elements such as the New Year drop ball for New York’s Time Square. 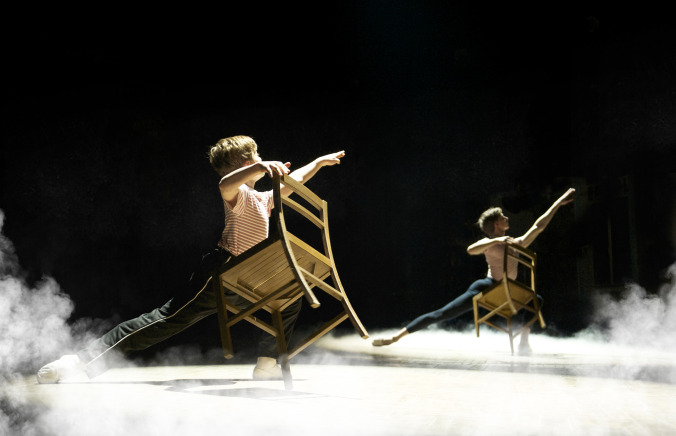 For other scenes within the performance, those that did not use the walled room or rotating staircase often used chairs as moveable set pieces for actors to dance with, sit on or move around to create a certain sense of space. They also made use of the theatres additions such as the safety curtain which not only provided practical use within the theatre itself, but became a set element to suggest that they were standing on the Royal Ballet stage. I thought this was very clever as it makes use of what is already available and it adds interest for the audience as they can connect the set element to what they have already seen in the interval etc. The set worked very well with the lighting provided (designed by (Rick Fisher) as it helped to set the mood within each building and it also helped with the transitions from set to set and gave the audience a chance to distinguish what room they were trying to portray. 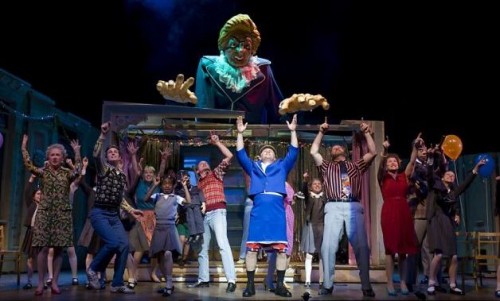 Due to the strong references to the miners strikes of the 1980s and the political influence at the time, the show (and movie) make references to the Prime Minister of the time, Margaret Thatcher. Due to the negative connotations of the political leader and the trouble that was caused for workers in the North East especially, she is often the source of jokes throughout the show, none more clear than the large ‘Maggie Thatcher’ puppet that is brought out on stage during the song ‘Merry Christmas Maggie Thatcher’. The puppet itself was very impressive due to the scale of the whole thing and the detail that had clearly been put into its making and design.

The show itself is very impressive for the content, music, choreography (which was stunning to watch) and other performance elements but also for the way it ties in with the limited but detailed set and how they help the transition with small additions such as the chairs or the way they react to the lighting. It was very interesting to watch and has only fuelled my love for the film and story itself.