Back in 2011, I went to see a show at the O2 arena called ‘Batman Live’. It was an adaptation of the original Batman comic story, but brought onto the stage for family entertainment, rather than through film. The whole show was spectacular, from the costumes, to the use of illusion to the high flying circus tricks. But one of my favourite aspects of the show was the use of large scale set and prop pieces, the video backdrop and the way the characters interacted with both these elements to tell the story. 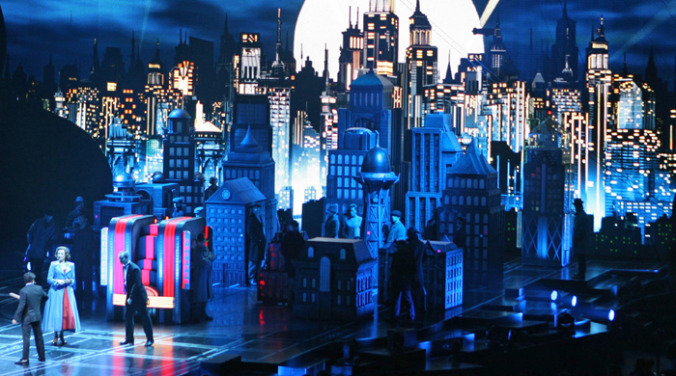 The Production designer for ‘Batman Live’ was the highly acclaimed Es Devlin, who has previously designed the live shows of Take That and Muse (who’s show I previously looked at when I researched Brilliant Stages). One of my favourite elements designed by Es Devlin and Executive Producer Nick Grace was the scaled-down city buildings which covered the whole stage. They were impressive as they gave you the feeling of a vast, imposing city, but without the using the actual height. The scale also allowed the actors to move more freely around the stage, often giving the impression that they were covering a much larger space (running all over the city) than they necessarily were, which was very interesting to watch from an audience perspective as it also meant that you could see much more than you may have been able to with a taller set. 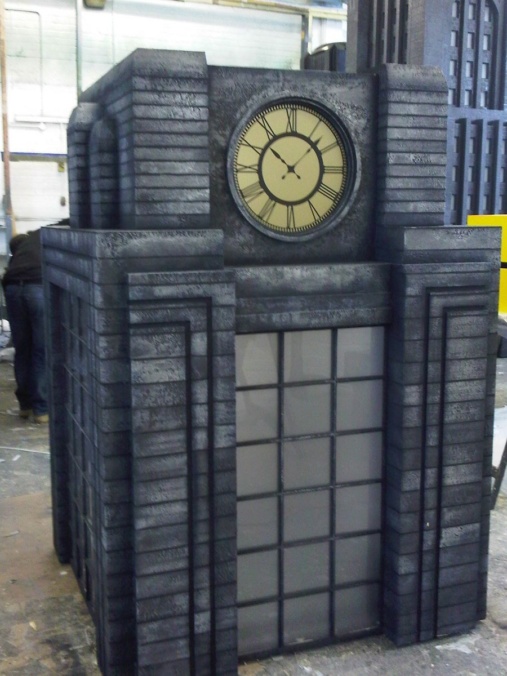 Whilst completing the research for another blog on the scenic effect artist Fiona Stewart, I found that she was involved in creating the set for the Batman Live tour, including painting the faux finishes on some of the scale buildings that I was talking about above. I always find it interesting how different people and projects that I have been interested in separately together, are often linked and have worked together. 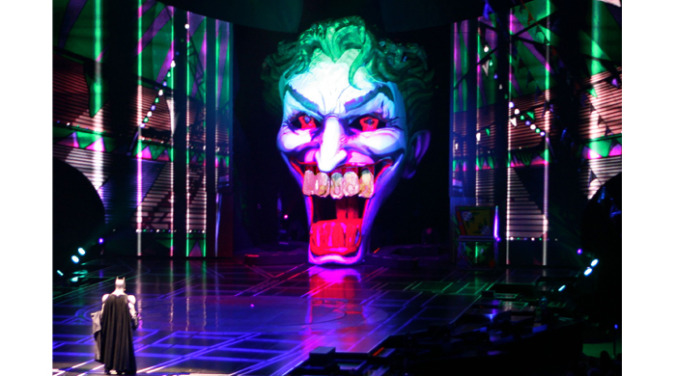 Tait are a large scale set building and construction company who supplied some of the set pieces for Batman Live (along with several other big events such as the London Olympics ceremonies, Macau – city of dreams and the Take That Progress Tour that Es Devlin also worked on). The constructed the main stage system including the lifts and pulleys needed to raise the actors, stage pieces and create reveals as well as building the impressive ‘Joker Mask’ pictured above. I really liked this particular set piece as at first glance there was nothing unusual about it, but then actors and acrobats began to appear out of the mouth, forming the teeth, tongue and eyes of the mask. It became a performance space as well as a set piece. The original mask was sculpted to a smaller scale by Es Devlin before being scanned and turned into a 3D image using CAD, sectioned and created from as an aluminium frame. The end size of the mask was around 25ft and included rungs and ladders so the acrobats could move about inside the frame to perform their tricks and movements.

‘By bringing our experience from the rock’n’roll industry into a theatrical environment, we helped to deliver a technically innovative and visually impressive touring show.’ 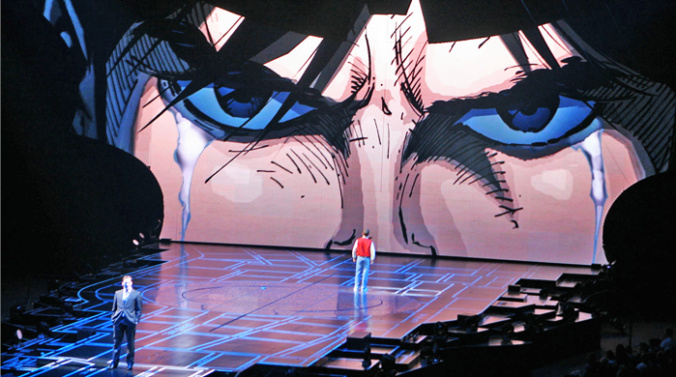 One of the most visual pieces of set was the enormous video screen at the back of the stage which was used to help illustrate the story with ‘comic book’ style animations and action words to emphasise the fight scenes. Sam Pattison was the video director for the show (having previously worked with AC/DC and The Rolling Stones) and along with many other members of the video team, they created a visual story that helped transition the show from one place to another and to also create a much large set space as it allowed the audience to move through a building without the need to physical set pieces and props. It also gave the feeling of a much larger space, which was helped by the fact that I saw the show in the 02 Arena which has a large ceiling space to make use of. 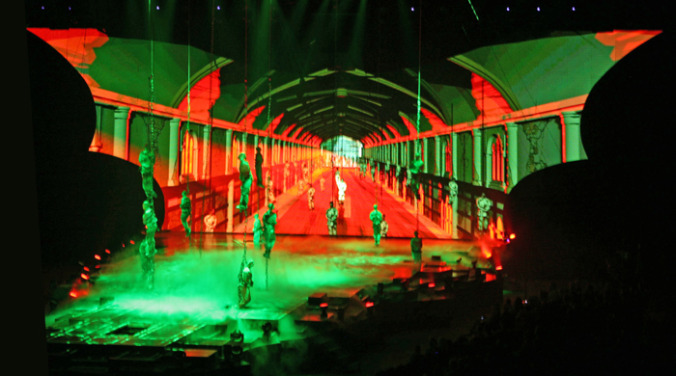 Overall, I absolutely loved the show – even though I had not previously been that interested in Batman or the comic book genre – due to the spectacular set, atmosphere and the show itself. The incorporation of acrobatics, flying tricks and magic acts also added an element of wonder, emphasised by the surroundings and video screen that immersed you in the whole experience.