When we visited London, the second show we went to see was The Royal National Theatre production of War Horse that had been transferred into the West End at the New London Theatre in Covent Garden. I had previously been to see War Horse when it first opened at The National Theatre, but I was much younger at the time and had since forgotten the details of the show, so I was glad to be seeing it again! I loved the show the first time I saw it and I was not disappointed the second time round. The puppets are definitely the stand out of the show, but this time I was able to appreciate the finer details such as the way 3 poles were used to represent many different things within the set, the representation of a torn piece of paper over the top of the stage onto which illustrations and dates were projected and the interaction between the actors and their puppets. 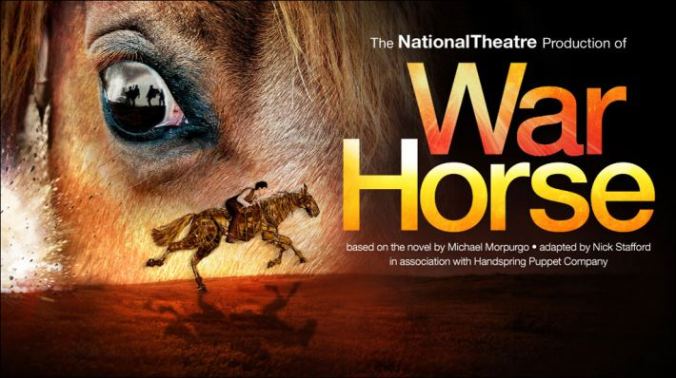 The stage designer for war horse was theatre designer Rae Smith, who faced the challenge of representing WW1 on stage – initially on the Olivier stage at The Royal National Theatre, but later transferred into the West End. Michael Morpurgo said that his original inspiration for the story ‘War Horse’ came from an old painting of an unknown horse called ‘Joey’ (hence the name of the main equine character) by a Captain called James Nicholls, who was also included in the story by Morpurgo, so even though he did not know a lot about the Captain his story is kept a little bit alive by the show (which I really like the idea of). This original inspiration for Morpurgo also went on to inspire Rae Smith for the stage design, as she knew that one of the fastest ways to communicate to the audience was through drawings as it explains a situation faster than description often can. Therefore, she decided to include drawings within the shows within a ripped sketchbook page hanging above the back of the stage (supposedly from James Nicholls’ sketchbook) that had these ‘drawings’ (drawn by Rae Smith herself) projected onto it to help tell the story. 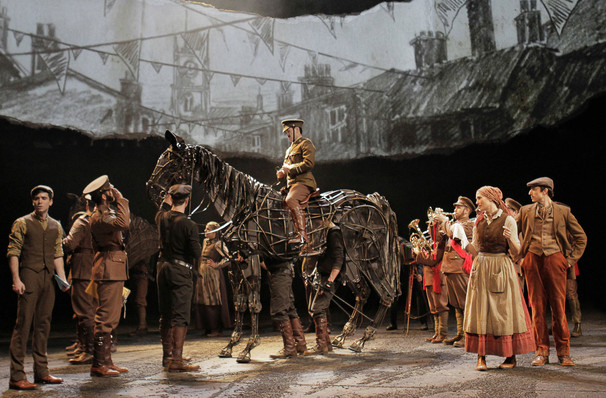 Although the set elements all came together to create a minimalist set that allowed for audience imagination, the puppets are still my favourite part of the show. I just think the look of them (especially the horses) are absolutely beautiful, the way you can see the construction and manipulation does not make them seem any less ‘real’ to the audience. At the beginning of the show you always notice the people moving and manipulating the puppets, but as the show progresses and you become more involved with the show, they begin to blend into the animals and become less noticeable. Instead of seeing people, you just see the creature and in your mind it becomes real. To me this shows that the idea they have created has been very successful, as they are not trying to give you realism on stage, they let the audiences imagination do that for them. I think it also helps that the puppeteers are wearing traditional ‘country’ dress that matches the horse or animal they are manipulating. I think that they are trying to represent the horse – or other animals – personality or style on the outside, instead of simply getting them all to wear black, they aren’t trying to hide the fact that the animals are puppets, they are embracing it and emphasising it. 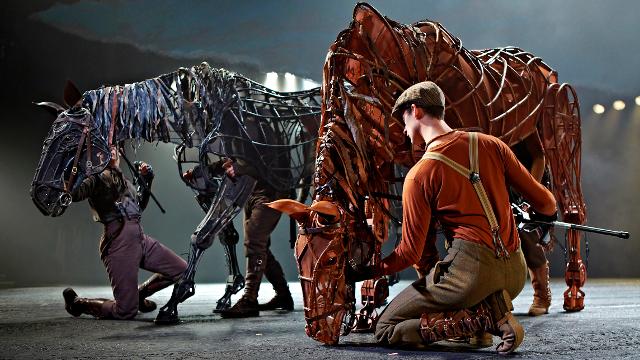 The puppets were originally designed and are still made by The Handspring Puppet Company, a company founded in South Africa in 1981 and as a company they have had work shown in over 30 countries around the world. This expanding company has over 20 full-time staff as well as numerous performing artists to show off their works. The success of Handspring and War Horse has allowed the company to expand and develop the art of puppetry for other projects and artistic ideas.  The puppets (mainly the horses) are made from cane frames and stretched georgette (a type of dull-finished crepe fabric) and the two main horses Joey and Topthorn weigh around 66lb or around 4.7 stone. The puppeteers inside spend many many hours training in the art of moving and manipulating the horses in time with the other actors, who often have previous experience in dance, physical theatre, circus performance and gymnastics in order to move in the correct ways within the puppets. They also have to be extremely strong in order to support both the puppet and sometimes a rider and then move their bodies when the horses fall, die, or rear up. This ability to manipulate both their own bodies as well as the puppet amazed me throughout the show and it is something that often goes unnoticed due to the already impressive puppets themselves, but without the actors, the animals could not come alive and the show would cease to exist. 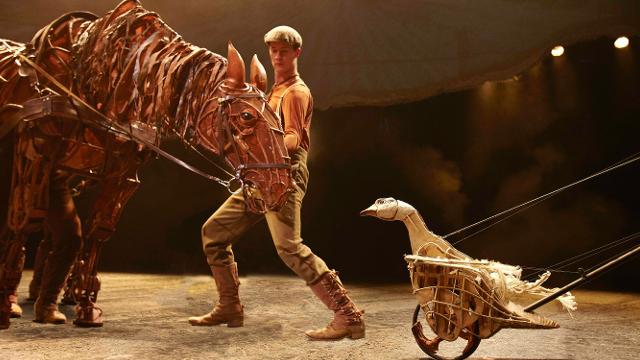