During the London trip, we had organised a back-stage tour of The Royal National Theatre to see all of the stages and various departments behind the scenes. During the tour I found out lots of interesting information about The National Theatre and the running of the organisation, as well as the scenic department, props department and everything else that happens within the space. 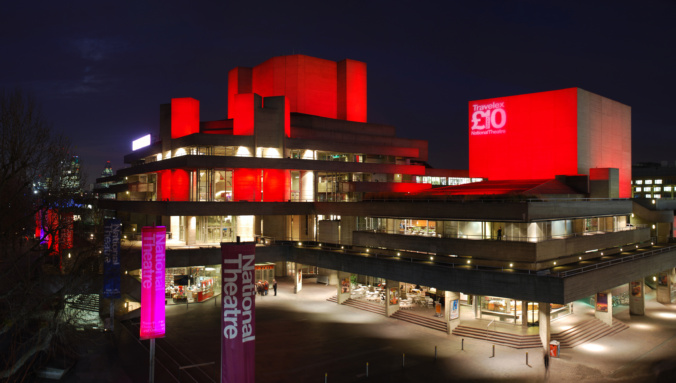 The National Theatre – as a company – opened at the Old Vic Theatre with Hamlet over 50 years ago. Since then it has produced over 800 plays and has moved into its own purpose-built theatre, which was opened by the Queen in 1976. The National Theatre building on the Southbank (London) contains 4 theatres of varying sizes, including the Olivier, Dorfman (previously the Cottesloe), Lyttelton and Temporary (previously the Shed) stages. Each one is designed with a different show and purpose in mind, for example:

Olivier – this is the largest stage within the National Theatre building and has advanced stage mechanics such as a revolving stage. Some of the productions that appear on this stage are later transferred into the west-end – such as War Horse and The Curious Incident of the Dog in the Night-time – in order to let the shows run for longer and gain a wider audience.

Dorfman – this stage has recently been re-opened after a large renovation project using the largest monetary donation The National Theatre has ever received (by the currency exchange company owner Lloyd Dorfman). This theatre now has seating that can be moved to create various formations or hidden under the floor entirely to create a larger stage, or theatre in the round.

Lyttelton – this is the more traditional proscenium arch stage, with around 890 seats which can house 2 productions at once. The sets for 2 different shows are built onto moveable platforms so they can be easily changed round, so the shows swap every 3-4 days, meaning that 8 different shows are performed within The National Theatre each week.

The Temporary theatre – was originally called The Shed, but the name had to be changed due to a copyright infringement, and it was only supposed to be a temporary structure, but it was so successful that The National Theatre applied to extend the buildings contract with the council and it has been approved for another 3 years. The shows put on in this space are often new experiments with theatre and the close-ness of the seating allows for a more interactive style of theatre to be performed.

As well as seeing all the different stages (apart from the Olivier due to the new show being in the middle of tech rehearsals) we went behind the scenes to the set, scenic painting and props section, which is located in the middle of the building behind all the stages. Here, we got to see a table of props from previous shows including a sculpted wooden angel that was made out of a flexible material instead of a wood block as it first appeared. It was really interesting to see all of these props, which also included fake food, a crocodile from Peter Pan and a polar bear puppet head from a stage version of The Northern Lights (which I tried to find more information on, but I was unfortunately unsuccessful).

I loved seeing all the different departments that work behind the scenes at a theatre as big as the National and I would love the opportunity to work within an organisation like this in the future. Looking at all the puppets has also inspired me to research this area of entertainment design in the future, as I was intrigued to find out how all these mechanisms worked as well as the design and history of them…