From the 1st-5th December, I went on a trip with my University class to London and during this time we went to see shows, exhibitions, displays and the general sights and sounds of London. One of the shows we went to see was the recently revived musical ‘Miss Saigon’ which I had previously heard of but didn’t know an awful lot about. All I can say is that it totally blew me away. The staging, the lighting, the emotional impact all came together to create an incredible show about the life of country girl Kim, her experiences with prostitution in war-torn Saigon and the consequences of her relationship with an American Marine. 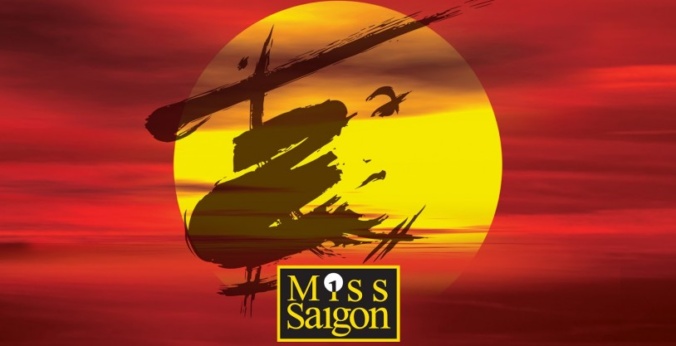 Within the show, there were many moving set pieces, including the ‘dreamland’ building, slum tents and other building side pieces that moved in and out of the wings. But one of the most impressive moving sets – in my opinion – was the gate and fence combination used in one of the scenes. This particular part of the show took place on both sides of the gate to the American Embassy, and to overcome the problem of showing both sides, the designers created a two-part gate that could be spun from the middle and re-joined, so the viewpoint appeared to be on the opposite side. This happened several times during one song and for me it was one of the stand-out moments of the show. This was then followed by the landing of a helicopter on the stage, both the real deal as well as a projected version, showing how (a form of) film and live theatre can be combined within a performance.

The set designers for ‘Miss Saigon’ were Totie Driver and Matt Kinley. Totie is a theatre designer, graduating Nottingham Trent University in 1992 as well as being an assistant to other designers such as Anthony Ward and Tim Hatley for companies like the RSC, National Theatre and Donmar Warehouse. As well as designing for West End shows such as the Oliver! UK tour and other productions like Chitty Chitty Bang Bang, she has previously been involved with design for ‘Miss Saigon’ with the UK tour in 2002, which has since been produced worldwide. The other designer Matt Kinley began as a freelance designer before completing a degree in theatre design in 1994. He has worked for companies such as the National Theatre (where he designed over 40 productions) and as part of Cameron Mackintosh ltd. He redesigned ‘Les Mis’ for its 25th anniversary concert at the O2 arena and the ‘Phantom of the Opera’ concert at the Royal Albert Hall for the same length anniversary. Matt Kinley joined the ‘Miss Saigon’ team after the death of the previous designer Adrian Vaux in 2012, to build on his ideas with Totie Driver. 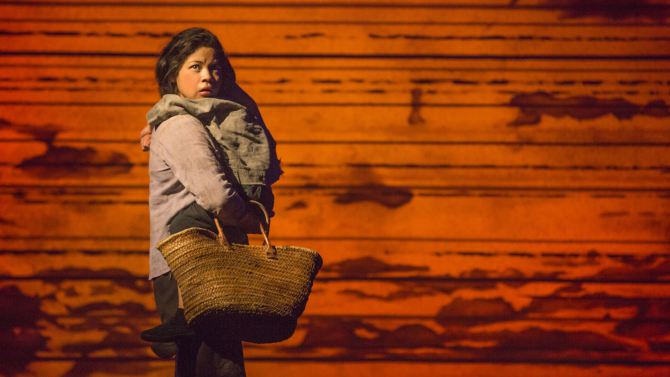 One of the other areas that created a larger impact during the show was the lighting design and the way it changed the atmosphere on stage and throughout the audience. In the image above, you can see the lit backdrop used in several scenes in the show. I loved this background, not only for the lighting aspect, but also because it looked like a traditional art/illustration piece, helping to link the culture in with the show. The lighting then changed dramatically several times, such as the use of low lighting at sadder or more desperate times throughout the show, to connote the darker feelings and events that were taking place. However, this often changed from scene to scene, as the next could be a far more light and expressive scene such as the Engineer’s song ‘The American Dream’ which contained many spotlights and bright colours, a massive contrast to the actual reality of what was going on and the lighting helps to emphasise this. The lighting designer for ‘Miss Saigon’ was Bruno Poet whose work is mainly focussed within theatre design and has won him several awards including the Best Lighting design Olivier Award. His work also extends into Opera where he won the Australian Green Room award for his design for the Sydney Opera house.

Overall, I thought the show was a very impressive combination of clever set, lighting and production design. As well as being amazed by this, the story also really affected me, due to it being true for so many people at the time. The events still effect those left behind today, especially as it was not actually that long ago that they took place and these children were left behind (within the show, Kim has a child with the Marine – Chris – a story shared by many prostitutes at the time due to the increase in this industry with the influx of American marines). The ending to the shows story was not a happy one, and I liked how they emphasised the fact that – unlike many musicals – the topic was not one to be happy about or celebrated. So the performers took their bows without musical and without smiling. It is like they did not want to take credit from this unfortunate event and situation, which I think showed respect for those effected in real life. I wanted to mention this as it is something that I took away from the show and was one of the things that stood out for me personally.