I recently watched the film ‘Sin City’ for the first time and I was absolutely blown away by the beauty of the film. The angles of the shots, the use of colour and contrast and just the overall look of the film.

The film was adapted from Frank Miller’s 1st, 3rd and 4th comic books in the original series, “the hard goodbye”, “the big fat kill”, “that yellow bastard” and the short story “the customer is always right”. The ‘graphic novel’ style has clearly been taken into consideration when designing the film due to it mainly being in black and white and the use of exaggerated features such as the shadows and the overall movement of items such as the clothes. Although when I first watched the film, I could tell that the backdrop was not all ‘real’ staging, I was still quite shocked to find how much was filmed using green screens (around 90%), but I think this just adds to the look of the film and the connotations of the graphic novel style as it means the characters stand out from the background which becomes more ‘static’. 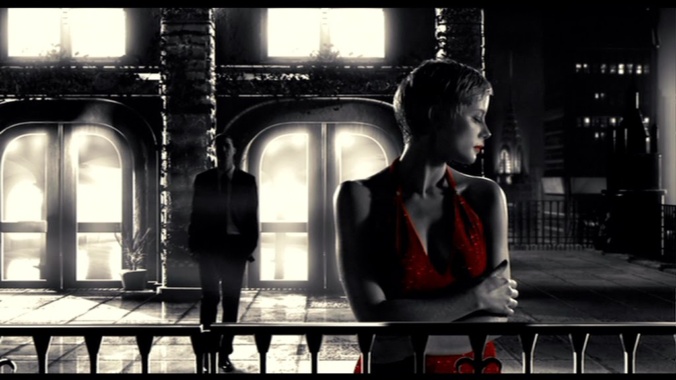 One of the things I absolutely loved about this film was the use of colour (or the lack of it). For example, in this opening scene, the dress is the only thing included in colour creating an initial impact when you see the scene. This odd use of colour also allows the use of shadows and contrast to make a higher impact than if the whole film was in colour. I think this also adds an emotional quality to the film as it draws on the idea of things hiding in the shadows and brings out an almost childish fear in the viewer. As the film is set in a city that contains a lot of crime and violence, this is probably a connotation that the author originally wanted, to make the viewer (or initially the reader) to feel intimidated by the city itself. 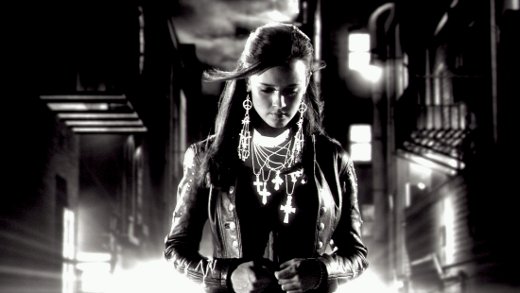 The use of the high white contrast, again, draws on the original style of the comic books. It may also be used to emphasise certain points of a character, for example in the image above Becky’s cross necklaces are all glowing with the white contrast. Although this could be symbolising her innocence in this whole thing (we later find out this is not true as she is part of a story of betrayal) is could also be drawing on the fact that the religious powers within this film are corrupt and deceitful and we find out that Becky is actually a part of this corruption as she sells out her friends, so it could be used as a form of foreshadowing of events to come. Use of strong colour symbolism is a feature of this film that could be transferred to similar films or even to a theatre productions (not necessarily of this film). As colour is such an important element of day to day life, taking this away and only including it at certain intervals could be used to play with the emotions of an audience watching a theatre production or film etc. Although this might not have been a natural choice of film to study when looking at props, set and costume (as most of it is created digitally) I still think it is a great source of inspiration due to the look of the film and the use of things like symbolism and colour as these things are visually intriguing.

The two main art directors for this film were Steve Joyner and Jeanette Scott, who had previously worked together on films such as Spy Kids and The Adventures of Sharkboy and Lavagirl – both as art directors. They have also worked on separate films, taking on different roles within the films art department such as set decorator, property master  and production designer, showing that the skills learnt for one area of film can be transferred and adapted for different roles – giving you more flexibility for jobs and employment. They were supported by an extensive department of set designers, decorators, prop masters, modellers and graphic designers, some of whom had worked with the two main directors on films previously mentioned above. Gaining contacts within the industry can be the key to jobs and work in the future.