When thinking about what to put on my blog, I knew that I wanted to look at other forms of live performance, such as concerts and arena tours. Two of the best concert ‘performances’ I have seen were Muse’s 2nd Law tour and Coldplay’s Mylo Xyloto tour (both at the Emirates Stadium), so I began researching the companies behind these designs. I then found out that the same company, ‘Brilliant stages’ designed and constructed both of these concert sets that I was originally going to research! 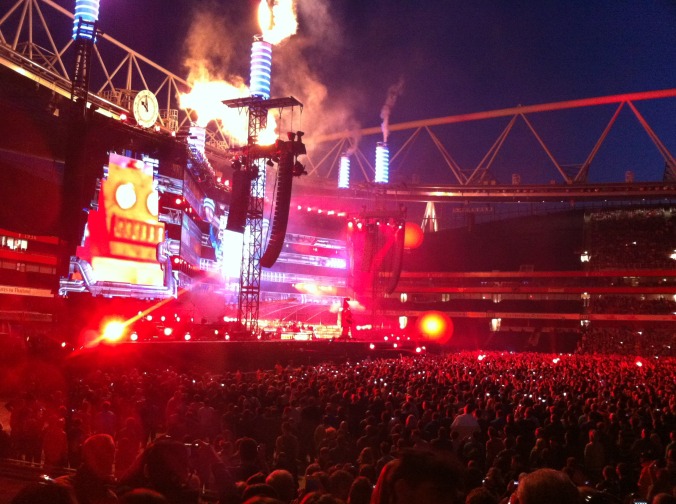 Brilliant stages are a company that originally made sets and pieces of staging for the cruise ship industry, but since its beginning in 1997 they have expanded into the larger markets of theatre and performance staging. This included specialist staging such as the large video walls used in concert performances, such as in the image I have included above as well as both the design, concept and construction stages of development within a project. They have designed concert and performance staging for various bands and music artists such as (obviously, Muse and Coldplay) U2, The Rolling Stones, ACDC and Take That. 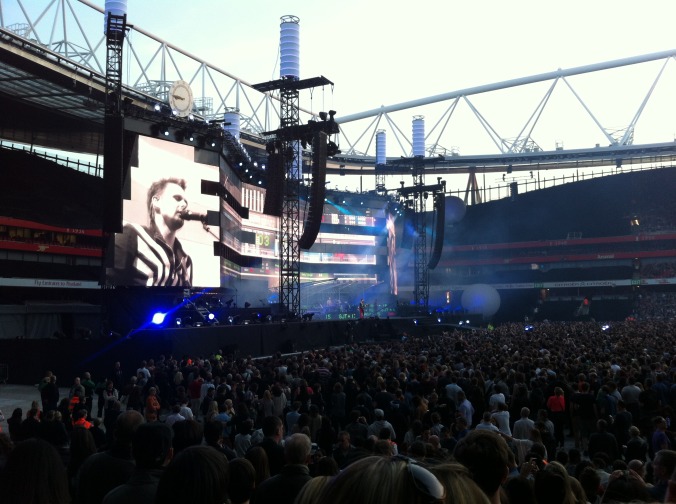 Brilliant stages also worked with another company, Stageco, to design and construct the larger-scale set for Muse’s 2nd Law tour. (As far as I can tell, Stageco provided the main structural elements of the stage to allow Brilliant Stages to build and extend the set elements on top of this framework.) The designer for this particular project (both the Brilliant Stages and Stageco sides) was Oli Metcalfe, an outside designer specialising in lighting as well as stage and visual design and he also won the TPi Lighting Designer of the year award for his work on Muse’s previous ‘Resistance’ Tour (which I also went to see). However, for this later tour, he wanted to emphasise the industrial theme of the arena show with large towers and video screens around the projected stage. I was very surprised when watching the concert, as these towers spaced around the stage also produced flames in time to the songs being played at certain points in the show. This ‘industrial’ theme may be to do with the subject matter of the music, world affairs or the fact that Muse’s latest album was much more electronic than before, so the use of ‘machines’ is evident both in the music and visual design.

Other members of Brilliant Stages – David Harrison and Kenny Underwood – were also involved with the design process of the stage and construction alongside Oli Metcalfe. The screens on the stage played a massive role in the ‘show’ aspect, as not only did they show close ups of the band members to make it easier for the audience to see them play and sing, but other short clips such as animations and small films were shown as part of the ‘performance’ aspect, creating a bigger show and making it more of a visual spectacle. 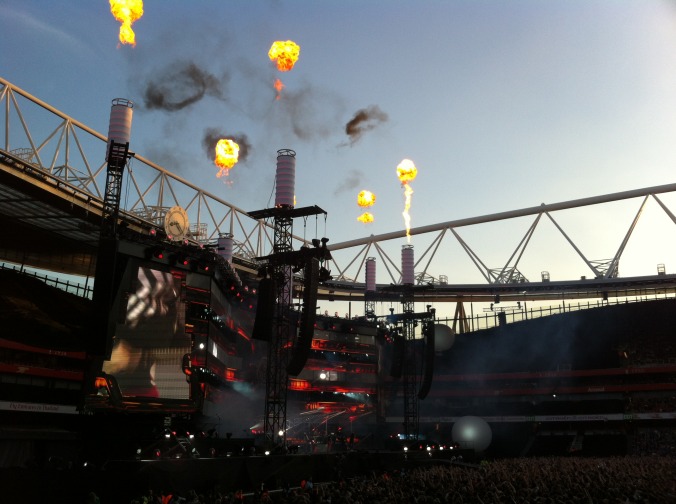 The other concert I have attended that was also constructed by Brilliant Stages was Coldplay’s Mylo Xyloto tour and the outside designers for this tour were Misty Buckley and Paul Normandale. Misty Buckley is a production designer based in London and she has worked on several concert tours and other projects as an art director. She also designed Take That’s Progress Tour, another show that Brilliant Stages constructed, showing that there have been several collaborations between these two sources, she designed the ‘graffiti’ style stage painting and decoration that covered the arced front stage. Paul Normandale – who has worked with Coldplay on several tours and performances over the last few years – is a stage, set and lighting designer who has worked on many concert tours for a variety of bands such as Arctic Monkeys, One Direction, Kings of Leon and My Chemical Romance from his company Lite Alternative Design. Stageco also created the supporting stage structure for this concert tour as well as the screen supports and scaffolding. 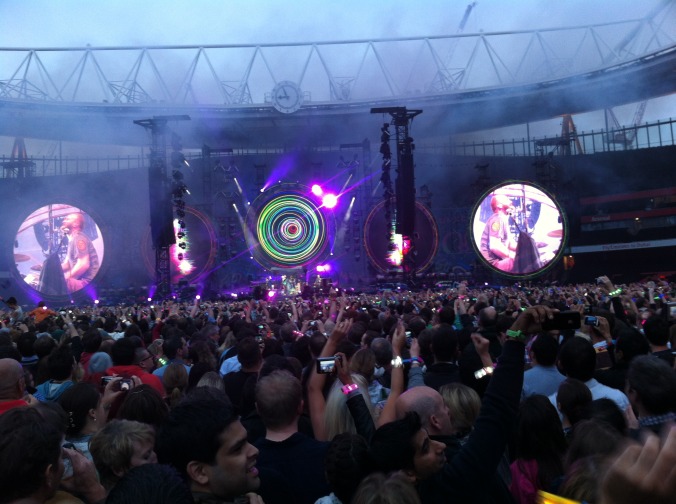 In a similar way to the Muse tour, the stage screens became a large part of the showmanship of the performance and – along with the lighting and laser beams – added to the overall experience, reflecting the musical beat within the song. As well as this, each person seeing the performance was given a radio controlled wristband that flashed and changed colour along with the song, creating a show within the audience as well as on the stage. 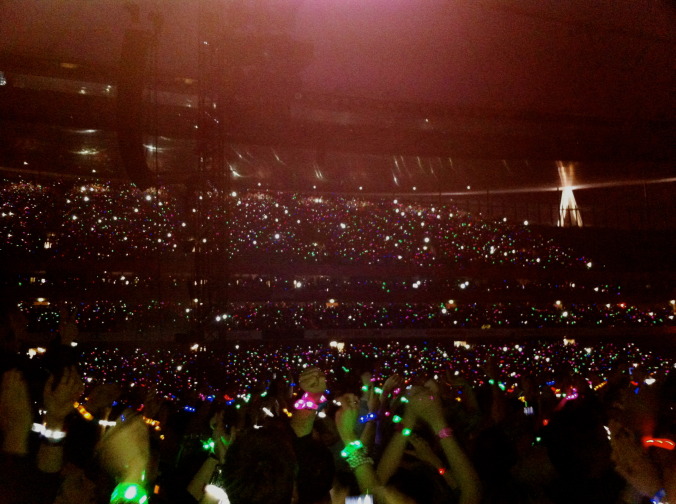 I think a big part of concert tours nowadays, is the interactivity of the band with the audience, people want to get closer and be more involved with the show and the wristbands were a very clever way of doing this. It also gives everyone a memento of the show, and as it included social media addresses for the band, it encourages everyone to get involved after the show, giving the band more publicity. This idea was again drawn on when confetti cannons exploded in the standings area, showering the audience with this confetti, shaped to represent the symbols on the cover of their album, helping to link the music and the show.

I really enjoyed both performances I saw and although both stages were constructed by the same company, there are many clear differences in the design, showing that two projects are never the same and each band needs to be approached differently when it comes to representing their music. This type of live performance (as well as theatre) is another aspect of Entertainment Design that really interests me and I would like to consider doing more research in this area as it would be somewhere I would be very interested to work in! 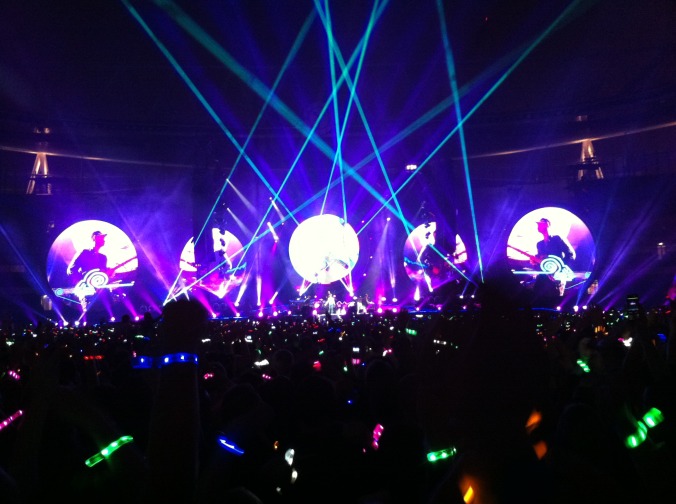 All the images within this post were taken by me at the concerts.