On Wednesday, I was lucky enough to go on a trip to see The Lion King in Sunderland with my University class as well as people studying the Costume Design course. Although I have previously seen the show, I was much younger (around 8) when I went, so I didn’t remember much of the performance itself. I was very excited about going as I had begun looking up images and videos of the show, as well as looking at it during professional studies, so I couldn’t wait to see it in real life!

When I was watching the show I was absolutely blown away by the entire performance, from the actors on stilts and attached puppets, to the use of shadows and moveable staging, to the dancer holding lights at the end of sticks so they appeared to be fireflies (I thought the latter was particularly beautiful, it always amazes me what you take away from a show…). It was interesting to see how many different costumes and animals had to be incorporated into the show through a relatively small cast! I was also lucky enough to be sitting near the outside isle in the stalls, so many of the performers often ran past in their amazing costumes and animal props, so I was able to get a close-up look at the various elements of the show. This included the large rhino puppet manned by two dancers, the hyenas and the performers who whirled the birds above our heads.

After I saw the show I was intrigued to find out more about what goes on in creating such a complicated show and how all the costumes and puppets etc. were designed and made. So I decided to complete some more research and include it in my blog! Julie Taymor is not only the director for The Lion King, but she also designed many of the original costumes for the show as well as the masks and puppets that are clearly associated with it. One of the challenges Julie Taymor said she originally faced was trying to include masks and puppets, but without restricting the actors in terms of facial expression and performance. She didn’t want to lose the human actor in any of the costumes, so no matter what the creature you will always be able to see a portion of the person controlling them.

“By seeing both the animal and the human, it underscores the humanity in the animal characters”

There are over 200 different masks and puppets used in one performance of The Lion King, and I love how unique each one is, be it through a unique character or just a slightly different facial expression. For example, when the large group of hyenas danced together I noticed that no two masks were the same, they each had a unique character to portray which I really liked.

Both Julie Taymor and the other creatives involved with designing the show were not just inspired by traditional African art or one single culture, their inspiration came from many sources. For example, Richard Hudson – who designed the set for the stampede scene where Simba is being chased – took his inspiration from 18th century Renaissance theatre with the use of perspective and the characters gradually increasing in size as they near the front of the stage, to give the impression that the beginning is a long way off. I really liked this scene as I though the use of the revolving set pieces was very clever. This use of traditional theatre techniques with the addition of the unusual masks and use of lighting to create shadows – as well as represent different times of day with very little changes – just made the show even more incredible. I was amazed at how a whole world could be created with very little props or scenery, how pride rock was completely recognisable through the way it curved up from the stage, whilst the grass of the savannah could be made into a hat-piece and yet it was completely believable. It is a show unlike any other I have seen and it would be interesting to experiment and see how far you could simplify something before it was no longer recognisable as the original object, or how you can represent a character or animal through material or simple costume additions. This is something I could think about whilst designing my stage set for ‘The Importance of Being Earnest’, although not every technique can be included in every show, it gives you something to experiment with and see how far you can take an idea. 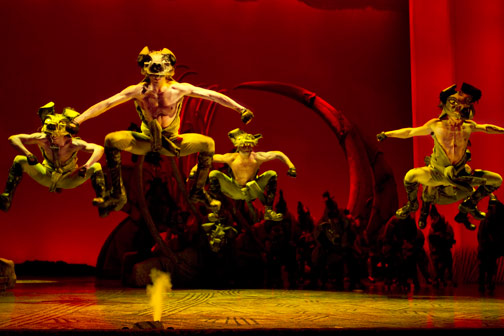