The ‘Renegade Theatre Company’ has been formed over the last few years by a group of friends and industry professionals to create a new company putting on youth theatre productions in High Wycombe, UK. As well as performing unusual productions such as ‘Zombie Prom’ and their current project ‘Lucky Stiff’ (showing this November) they are also in the proecces of building their own Theatre to house their performances, The Duke Street Theatre.

I was involved in their first production ‘Zombie Prom’ in February 2014, where I performed on stage as part of the Ensemble, True Blue and Mother. Being part of this prodction allowed me to see how all the elements of a show come together – not only on the performance side, but also everything backstage, from lighting to scenery to music production.

The set itself was not a tradition creation. Chairs and desks were stacked around the stage and attached to scaffolding poles that created a bridge – this ran around the back of the stage and over one of the wing enterances – to make it look like a disaster sight, but to also reference the idea that it was once a school before a nuclear attack (at the end of the script, it is suggested that the nuclear power plant nearby explodes causing the school in which the play is set to be torn apart, the plant is very important as part of the storyline to the whole show – for the full synopsis click here) the main part is performed amongst this ‘wreckage’ as part of a flashback sequence that explains the lead up to the distruction. Small additions were then added, such as a sparkely banner to show the transition from the school to a TV studio, but keeping most of the original set helped to maintain the idea of the ‘flashback’ and the distruction that is yet to come. 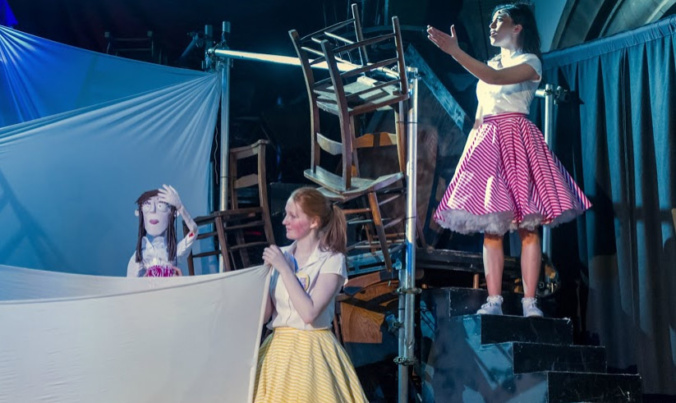 It is not only the set that makes an impact for a show, the placement and the theatre itself can make a huge difference to atmosphere and performance. The theatre space itself was an old church, imediately creating a ‘spooky’ environment for the audience before the show had even begun. I like this idea of using a non-traditional performance space as it allows you to play around with a show and its setting as well as the audiences emotions through connotation. This is a similar idea to the one I posed in my previous post about the Poppies in the Moat, where I suggested an outdoor performance of War Horse would not look out of place amongst the memorial flowers and could even be performed as part of the instalation. The one-level space of the church floor also allowed the actors to walk amongst the audience to create more of an interactive theatre piece that really involves the audience in the show, a style of theatre that is currently growing in popularity especially among youth theatre groups experimenting with different styles of theatre.

Their next show ‘Lucky Stiff’ is being performed this November at The Duke Street Theatre, High Wycombe. For more information follow this link.