Poppies in the moat

As a memorial to mark 100 years since the start of the First World War, an installation at The Tower of London was created by ceramic artist Paul Cummins and Theatre designer Tom Piper. This art memorial piece consists of 888,264 ceramic poppies (the iconic symbol of remembrance and WW1) which is the number of soldiers to have died during the war period. These have then been ‘planted’ in the moat surrounding the tower as well as pouring from one of the upper windows and form a floating bridge over the public walkway to the tower. The fact that the poppies are featured at The Tower is also significant, as – during the war – it was used as a military depot and was also one of the places where soldiers swore their oath of loyalty before going off to fight. 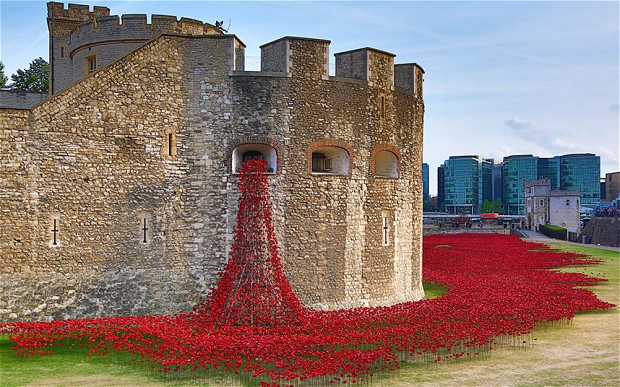 Artist Paul Cummins was originally inspired when he came across a poem written by a soldier – the poem was called ‘Blood swept lands and seas of red’ – in Chesterfield Library. However, Tom Piper had the vision to create a much vaster memorial, although his ideas were originally intended for a stage production rather than an outdoor piece. This shows how skills learnt for one area (such as theatre) can be transferred to a different type of performance space, creating a show within the memorial even if it does not include actors or performers etc. I can see why Piper originally had this idea for the stage, as it would create a beautiful representation of the war, with the juxtaposition between the fresh colorful flowers and the dark, damp colours we associate with the trenches and war (as well as the obvious connotations of the flowers).

I was also interested to see images of the puppets from the sage show ‘War Horse’ pictured within the field of poppies as I can see how the flowers could be transferred to this type of performance, especially as the themes for both the memorial and show fit together. It also inspires the idea of an outdoor version of the show, performed within the poppies to emphasize the memorial and the message of remembrance. I actually found these images – and the memorial itself – very moving, especially as there is a flower for each fallen soldier. I like the fact that everyone has been remembered here rather than just a general memorial, it gives comfort to the idea that no one is truly forgotten. 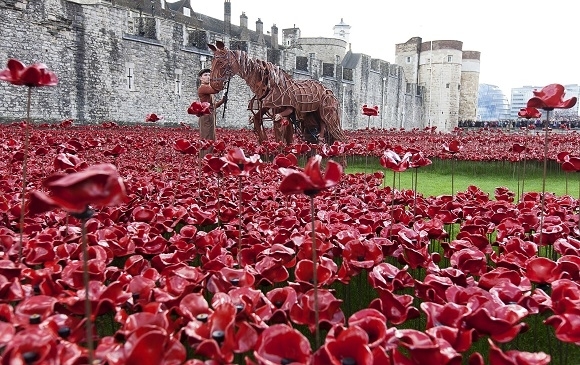 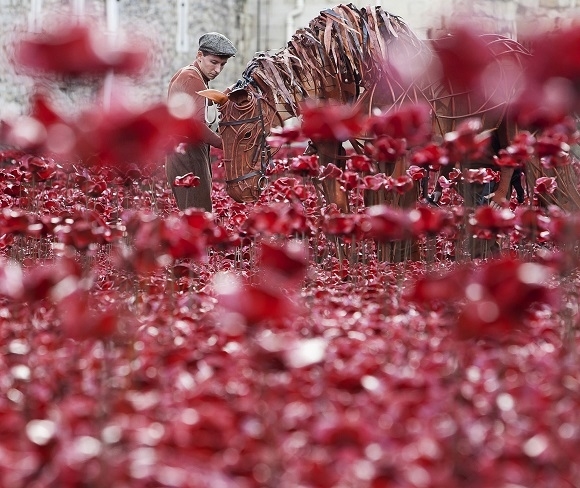 The Blood Swept Lands and Seas of Red – Unknown Soldier

The blood swept lands and seas of red,

As I put my hand

As God cried a tear of pain as the angels fell,

As the tears of mine

fell to the ground,

To sleep with the

As any be dead.

My children see and work through

Blessed by love so far from pain of my resting

Fields so far from

Of living hell, to see the people around me

Fall someone angel as the mist falls around,

And the rain so thick with black

Over the clouds, to sleep forever and kiss

The flower of my people gone before time

To sleep and cry no more.

I put my hand up and see the land of red,

This is my time

I may not come back

So sleep, kiss the boys for me